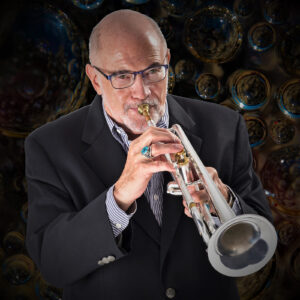 The culmination of “Trumpet Fest” was Jazz legend Mike Vax with one of the most anticipated clinics of the day.  Vax launched into his informal discussion of what he has learned over his extensive, fifty-year career.  He mentioned that during his career he has never been without work, attributing this amazing fact to his philosophy: “Know what to do to make people happy.”

Vax impressed the audience with his vividly colorful sound and beautifully lyrical phrasing, but jaws dropped in the audience when he mentioned that he had throat surgery just two weeks prior to the clinic; we should all remember this amazing feat when our chops are a bit stiff from too much (or too little) playing.

Vax mentioned that in his experience, the hardest part of practicing is opening the case. He instructs students to intersperse trumpet practice and homework. Since one cannot play the trumpet without rest, or focus on work without a break, the two activities could act as a break for each other, yielding many more productive hours of work and practice.

Vax called a member of the audience to demonstrate Don Jacoby’s “high notes are not higher, just farther away” philosophy. He had three members of the audience stand to represent different parts of the trumpet register.  Then, the audience volunteer played an arpeggio up to G’’’, thinking of each note as out instead of up. The product was a huge, powerful sound with little strain or effort.

Mike Vax reminded us all that being a great musician is far more important than being a great trumpeter; he exemplifies this concept with every fiber of his being. 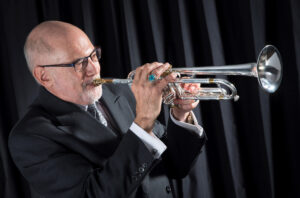 Mike Vax is an International Artist for the Warburton Company. He is also a Summit Records recording artist. Mr. Vax performs exclusively on Warburton trumpets, cornets, flugelhorns and mouthpieces. He has played lead and solo trumpet with the Stan Kenton Orchestra, the Clark Terry Big Bad Band, and the U.S. Navy Show Band.

He has appeared as guest lead trumpet and soloist with symphony pops orchestras around the United States, and in Europe, as well as the All-American Collegiate Orchestra at Disneyworld.

As a recording musician, he has performed on more than 75 albums, including 20 under his own name. He is the founder and Chairman of the Board of Friends of Big Band Jazz, a 501c3 nonprofit corporation that has given over $65,000 in scholarships to jazz camps, funds to jazz programs in schools, donations to help musicians in need, and a donation to Habitat for Humanity for the Musicians Village in New Orleans.

Mike is also founder and director of the Prescott Jazz Summit, an annual jazz festival in Prescott, Arizona. Currently he is leading his own groups: The Stan Kenton Legacy Orchestra, The Mike Vax Big Band, TRPTS (Trumpets), The Mike Vax-Ron Romm Collaboration, The Great American Jazz Band, and the Mike Vax Quartet, Quintet and Sextet.

Mike has done workshops and concerts for over 3000 high schools, colleges and universities all around the world over the past 50 years. He has presented clinics at many state music conventions including California, Oregon, Arizona, Washington, Louisiana, Tennessee, Florida, Idaho, Utah, Arkansas, and Texas. Mike as also done clinics at such national conventions as: MENC, International Trumpet Guild, IAJE, JEN and others. He is very active as a clinician and soloist in both the classical and jazz idioms. He has written articles for such magazines as: The Instrumentalist, The Brass Herald, The ITG Journal, The IAJE Journal, and the Texas Jazz Educators Journal.

Book Mike Vax or One of the Groups Today

Contact us today about visiting your school, club or organization!