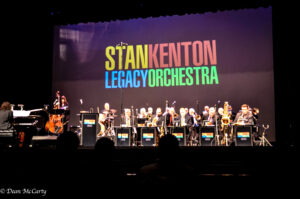 The Stan Kenton Legacy Orchestra performs some of the well-known music of the Stan Kenton Orchestra. In addition, in keeping with Stan’s insistence on not just performing nostalgia type music, we also perform fresh new material written in the Kenton style, as well as original material written by members of the Band. Read more about the band and its mission. 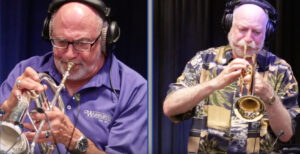 Mike Vax and Ron Romm met in the early 1970s, but did not perform or record together until 2017 when they recorded their first CD "Collaboration." Mike Vax and Ron Romm are two of the most well-traveled and often recorded trumpeters of their generation. Ron spent three decades with Canadian Brass, as well as being an in-demand clinician.Since leaving Canadian brass, he has been teaching at the University of Illinois. Mike has been a clinician since his days with the Stan Kenton Orchesta, and has been organizing performances and student clinics for most of his adult life. Both men have given much of themselves to music and music education. 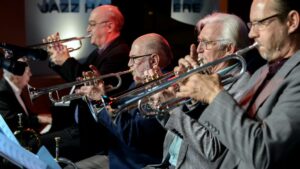 The TRPTS (Trumpets) Group of four trumpets and four rhythm was conceived in the mid-1980s by Mike Vax as a trumpet version of the popular Charlie Parker tribute band Supersax. The band's one CD - TRPTS: Transforming Traditions – is one of the best selling albums of Mike Vax's career.

TRPTS (Trumpets) was formed in 1985 as an experimental group to bring the history of jazz trumpet to audiences through performing voiced out solos from famous jazz trumpet players, playing music associated with trumpet jazz over the years, and presenting new music written especially for us.